San Ysidro, California Across the Border, on to Cataviña, Mexico

From the beautiful palms and rich freshness of San Diego we traveled through the US/Mexican border to the gray, ramshackle slums of Tijuana, Mexico. It was an assault on the eyes and the heart. Everything seemed crammed together, houses, stores, cars, even people. And everything had a gray pall over it despite the sunny sky. But before Tijuana, came the border crossing.

The border itself seemed expansive, there were not many vehicles and directions were easy to follow. On the Internet you can see many photos of the US/Mexican border crossing but they show the first part of the crossing only. 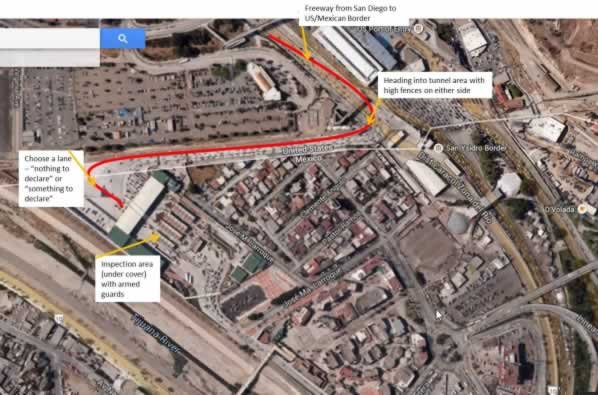 We rode into the border area and turned right. That took us into a long tunnel-like section heading towards the border guards. 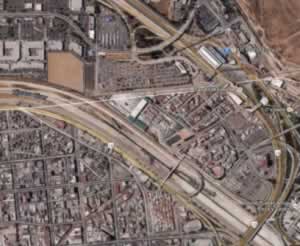 We chose a lane that said “Nothing to Declare” and were asked to stop anyway. They usually stop motorcycles so we were not surprised. What they wanted to check is the registration of the bike and to confirm our reason for travelling into Mexico. The border officials were polite and friendly. So were the guards with automatic weapons, Al Capone style. The US is serious about protecting its borders from illegal entry. It is almost Kafkaesque in its nightmarish and bizarre quality when riding by the high, dark fences that are so very obviously meant to keep “aliens” out. 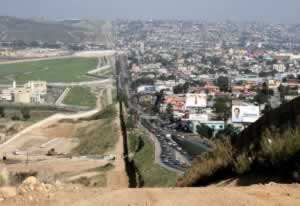 This photo (in the public domain) shows better than any photo we could take, just how different lives must be on either side of the fence. (USA on the left, Tijuana on the right.) Photo credits to Sgt. 1st Class Gordon Hyde – http://www.ngb.army.mil.

The second photo, also in the public domain, shows the fence continuing into the Pacific Ocean at Tijuana, Mexico and San Diego, USA. 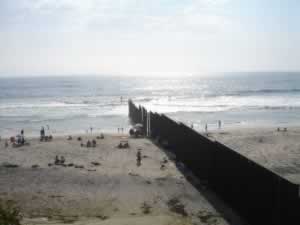 We took a quick ride through a part of Tijuana that looked quite prosperous relative to the initial clapboard housing and crowded lanes we saw initially. Although sunny when we took the picture it was starting to rain and clouded over. But this part of Tijuana looked clean and friendly. We headed back down the road eager to reach the sun of this wonderful part of the world.

It was extremely windy heading south from Tijuana to Ensenada. We were still trying to beat the storm that we knew was heading towards San Diego and the Pacific coast of the Baja. 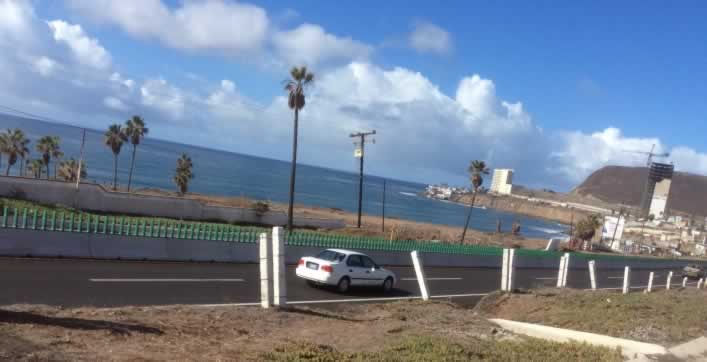 When the sun peaked out it showed just how jewel-like the Pacific coast of Mexico is. Housing for the wealthy dotted the coast line. Many new buildings, on the coast side of the freeway, were being built to accommodate those who wished to enjoy sun and surf, right on the beach. It was odd that many of the new high-rise buildings—I assume, condominiums—were completely cement up the highway side. No windows at all faced the freeway while many windows and patios faced the beach. It made complete sense and suggested that each apartment was quite large.

The coastline was gorgeous but it was clouding over and very windy. The wind made it difficult to take additional photos—I had to turn around in my seat and hold both hands on the camera, so no hands holding on to bike—but we headed inland, quite a way from the water, before reaching Ensenada.

A rainy day in Ensenada is an understatement! It poured down over the town. People scurried to close open air businesses and raise tarps over souvenir stands. We felt sorry for the people who arrived by cruise ship and hoped they could stay for longer than one very wet afternoon. 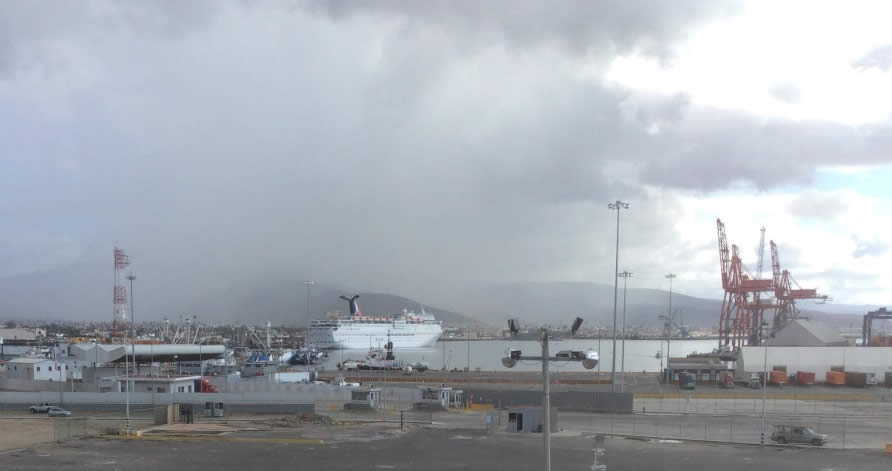 Poor horses—wet, but at least not cold.

Very strange riding in the rain in Mexico! But despite the rain, we are heading towards Guerrero Negro on the border between Baja California Norte and Baja California Sur.
The scenery is amazing! Cactus after cactus interspersed with aloe Vera and big rocks. Just mile after mile after mile of cactus (I should say, kilometer after kilometer). Notice how rough the road is and how very narrow the edge of the road!

We travelled through this gorgeous land until the sun set. It was so beautiful in this particular area that we decided to stay the night in Cataviña rather than going as far as Guerrero Negro.

In the picture below, can you see me (Marilyn) in the side mirror of Vern’s bike? 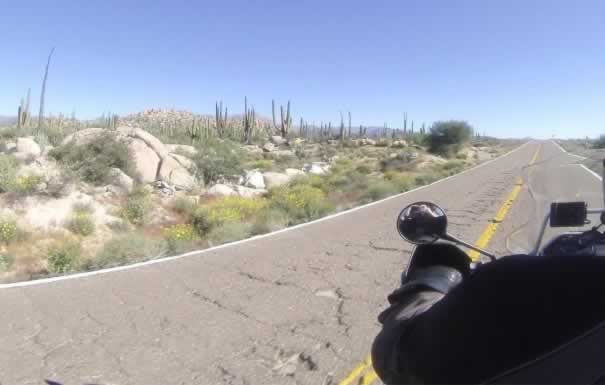 The small motel where stayed was clean but that was all. It had cracks in the ceiling and up the walls. The lights didn’t go on until sundown when the generator started. And the lights went out around midnight when the generator shut off! We would not have stayed here except the motel down the road although beautiful according to reviews, was more than twice as expensive (around $120 per night), more than we wanted to pay.

Cataviña is not more than a dot on the map of central Baja California Norte but is famous for being the closest “dot” to the only area where the cirios plant grows. This is such an interesting plant we wanted to return to the oasis area where we could photograph them, before continuing to Guerrero Negro.

Next: The Curious Cirios Plant – aka Boojum Tree