Fighting the Cold to Washington

Fighting the Cold to Washington

“Hasta la vista,” family, friends and neighbours! We are on our way to the sunny beaches of Baja California Sur!

Vancouver BC to Roseburg Washington

On a crisp November day we leave Vancouver and head for the Canada/US border in the sunshine. It’s cool from the wind while riding the highways but our spirits are high, keeping us warm. We reach the border by noon and pick-up some adult beverages at the duty free store. The border officials are interested in our passports (understandably) and our motorcycle registration. With smiles and “have a good trip!” we are on our way.

I love Washington State but it has clouded over and the ride along the highway is cool. The I5 Interstate Highway through Washington is fast. Forest, housing and businesses crowd together along the highway making the ride stimulating. Going past Bellingham and Everett we head towards Seattle. Although we pass by Seattle, the traffic is busy and it’s harder to weave in and out. The clouds are darker overhead and the ride gets cooler and cooler. We stop south of Seattle and have a snack at a Wendy’s. It is a welcome relief from the cold and I am pleased I listened to Vern about wearing so many layers of clothing.

Too Cold to Continue through to Oregon
It is 4 o’clock by the time we head off again. By 5 o’clock I am too cold to continue. We are still in Washington State, a long way from Eugene Oregon where we had hoped to be by the end of Day 1. We find an inexpensive motel in Roseburg for the night and, after showers, a nightcap, and another snack of apples and pears, we snuggle down in a comfortable sleep.

Motel 6 – Our Choice of Motel

We decided before leaving on our trip that we would like to stay in clean, comfortable lodgings that are as inexpensive as possible. Neither of us wanted (or expected) 5-Star accommodations, especially while on the road. We chose Motel 6 because they have a very “tight” franchise where all motels and units are exactly the same, are very clean and even offer senior rates. This particular Motel 6 (in Washington) cost $36 American for the night. 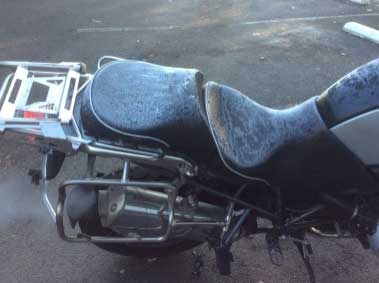 We awoke to ice on the motorcycle and other cars in the parking lot. We knew from the news the previous night that the cold front heading towards the US had already hit the east coast and was expanding to the central US with another front heading for the south western states today. We certainly wanted to outrun the bad weather.

A small smattering of rain hit us as we left Washington State and entered Oregon. Although we were wearing our rain gear, we did not wish to ride in rain. No motorcyclist does. So we rode as fast as safely possible before stopping for a mid-day snack. By 2 o’clock we had reached Eugene and raced on towards the Oregon/California border.

Our BMW has comfortable heated seats, both for rider and passenger, but the heated seat wasn’t enough for me. Vern very kindly gave me his heated vest (he donned an additional sweat shirt) that he connected to the seat. This meant he still had heat through his seat and I now had heat through the vest instead of my seat. It was marvelous! We rode past sundown but didn’t go farther than Medford Oregon, about 20 minutes north of the California border.

Not Our Targeted Stop Points, Fighting the Cold

Although not meeting our targeted stop points, we were satisfied with how far we had ridden in such cool weather. Yes, it was just as cold in southern Oregon as it was in Washington. The weather front was heading south (or heading east from the Pacific) very quickly.

We found another Motel 6 and had a good night’s sleep.

Next: Lane Splitting in California